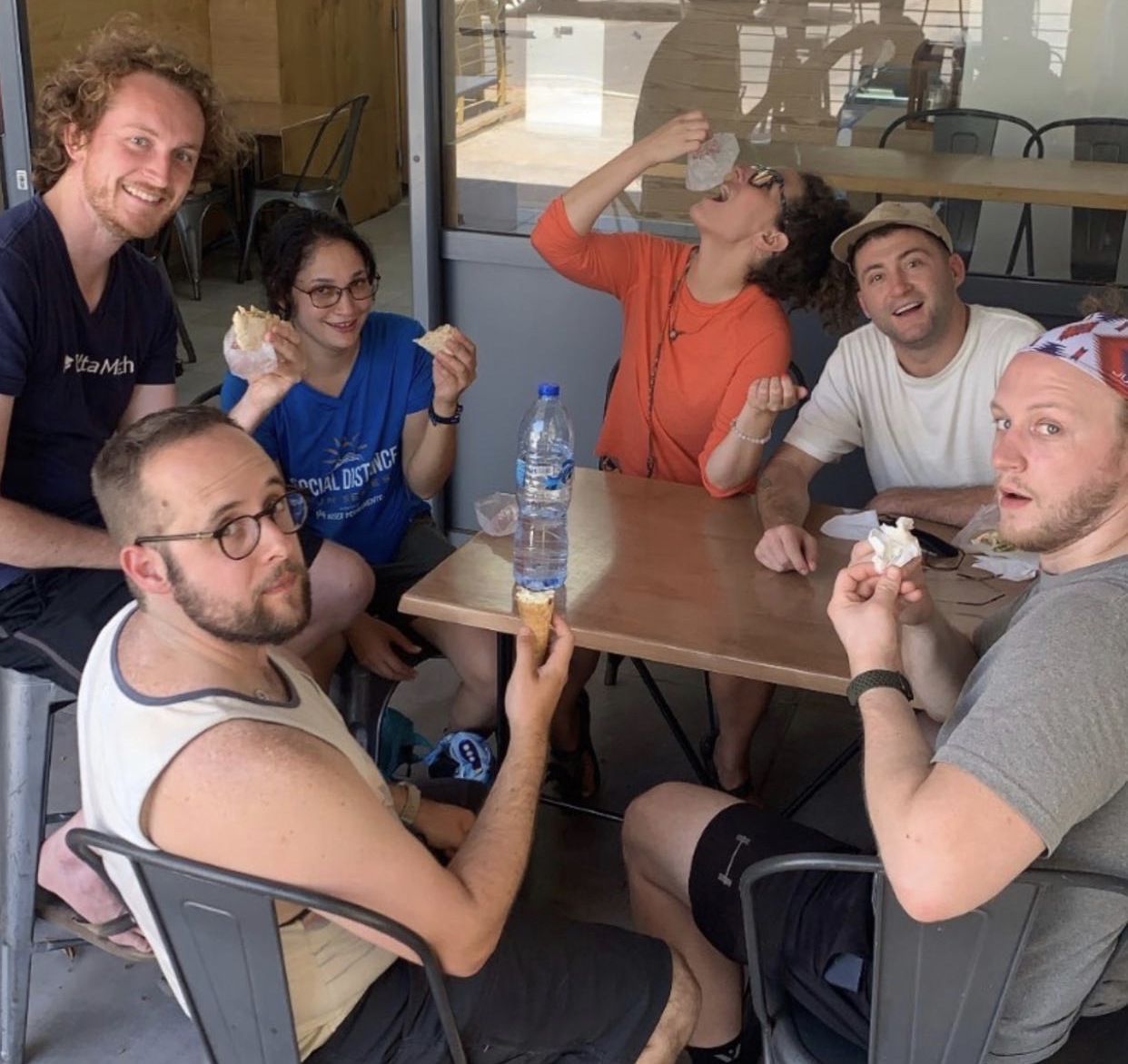 We got in around 9pm last night and spent the next three hours testing, retesting, and testing to make sure the results of the first tests were accurate. Between all the pokes and swabs, we got to know each other over some dinner and practiced “counting off” so we can quickly make sure everyone is accounted for throughout the trip.

We then traveled to our hotel in a private limousine that Birthright rented out for the trip. The limo looks exactly like a tour bus, it’s pretty cool.

This morning (Tuesday), we were served breakfast in boxes in bed. The boxes were full of little tasters of different cheeses, tuna, an omelet, and delicious O.J., among other things.

After breakfast, they let us sneak out to meet in the conference room together, where we did some ice breakers and learned a bit about Israeli geography and the upcoming itinerary. Nitzim, our birthright guide, has a great sense of humor and explained the rules and regulations. Then a quick ship to a coffee stop and a currency exchange, and we were on our way!

The first stop was overlooking the Bahai gardens in Haifa while we heard a brief introduction to some of the complexities involved in modern Israeli Jewish-Arab society.

We then went on to have an informative and thought-provoking tour of Haifa from a member of an “Urban kibbutz.” The community’s efforts to approach local challenges from a grassroots perspective was very cool. Haifa has a deep history of diversity with populations of Arabs, secular and Orthodox Jews, Russian olim, Ethiopian refugees, and Filipino workers. Eight different first languages were represented in a nearby kindergarten.

When our tour wrapped up, we took the limo up to Nazareth to our hotel and a buffet dinner. We refreshed our itinerary for the morrow – but to know what that is, you’ll have to tune in next time! 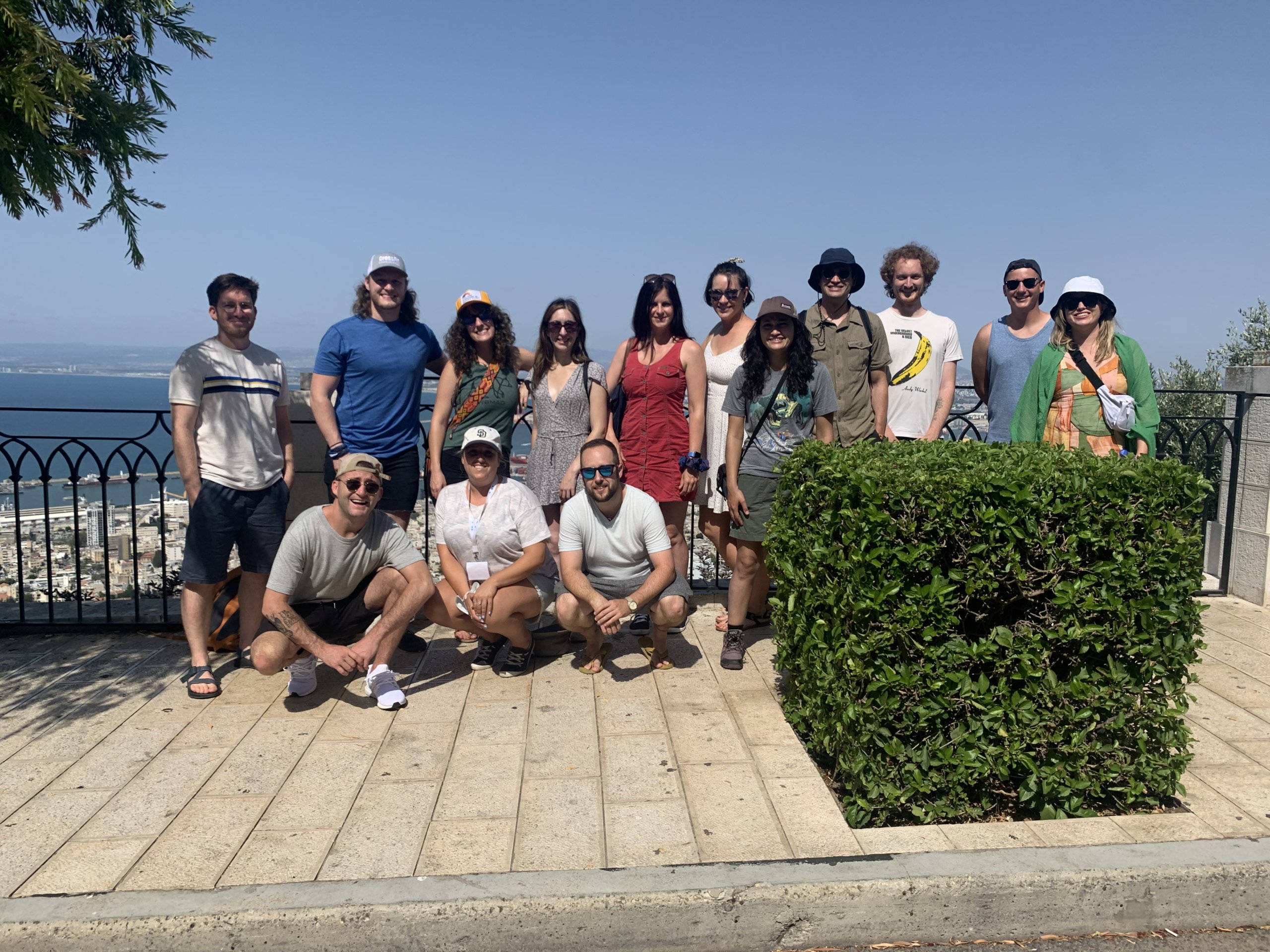 Every evening we’re asked to name our ‘highs’ and ‘lows’ for the day. It was safe to say that today a major ‘high’ was having Brad and Jeff (and Joe) rejoin our group!

Overall, though, I think the consensus was that today was a great day!

We started the morning taking a quick pitstop to take a picture of the Sea of Galilee, specially requested by Kyler. Then, it was off to Golan Heights. Here we learned some history about the 1948 War of Independence and later conflicts with Lebanon, in particular. Nitsan, our guide extraordinaire, did a fabulous job explaining some geopolitical history.

From Golan Heights you are able to see Syria, which shares a border with Israel. We learned a bit about the 2010 Arab Spring and later Syrian War that started in 2012. Interestingly, wounded Syrians who came to the Israeli/Syrian border during this time were taken by ambulance to hospitals and treated before being returned to Syria. Prior to 1967, Golan Heights was occupied by Syrians, and the bunkers that remain were originally built by Syria. (We also saw the border to Lebanon). I, personally, feel that I have a better understanding of the complexities of the area’s issues.

Next, we went back in time to Tel Dan and learned some Bible history. Once again, Nitsan did a great job explaining the significance. He started with differentiating the two parts of the Bible—what is confirmed by historical evidence, and what is not. Tel Dan is important because after the Kingdom split (after the death of Solomon) Israel, the northern kingdom, did not have the Temple. Since Judah was unwilling to allow access, Israel decided to build their own at Tel Dan.

Afterwards we headed to lunch and -finally- saw Brad and Jeff (and Joe)! Most of us decided to eat shawarma, and thoroughly enjoyed it. However, Julian insists that his ‘roadside mall’ shawarma was better.

Then…. Off to river rafting! Wow! As Ryker mentioned, Nitsan really downplayed this place. I think a lot of us expected this slow-moving not-very-exciting experience, but we all loved it! My group (Raya, Julian, Mac, and I) started off by immediately going backwards and getting wet. We had been warned that people hanging out on the bank might splash, and well, they didn’t disappoint. All of us were soaked by the time we finished! At one point we had to pull over because there was apparently a fire up ahead. While we waited, it was really cool to see how everyone tried to help each other.

The last major excursion of the day was liqueur tasting. We tried three different flavors, passionfruit, blackcurrant, and chocolate. All were delicious! It was a bit dicey there for a moment to see if we’d make it because the fire at the river delayed us, but it all worked out in the end.

Looking forward to another great day in Israel tomorrow!