Learning That I Belong

Kristina Harris participated in a free Taglit-Birthright Israel Trip with Israel Outdoors in the summer of 2013 on group TL-28-184. In December of 2013, the following article written by Kristina was published on JUF News. In this article, Kristina talks about her experience traveling as a Jew by Choice on the Israel Outdoors trip, including her expectations, fears, concerns, and describes her actual experience. Thank you for sharing Kristina! 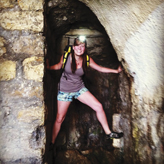 At a wedding, a lady next to me asked if I was Jewish, as the groom’s side was. I told her ‘yes’ and that I belong to North Suburban Synagogue Beth El in Highland Park. She responded “Really?! You don’t look Jewish. I never would have guessed.” At that moment I could have told her the reason I don’t “look” Jewish by her standards is because I wasn’t born Jewish and converted almost five years ago. I didn’t though, not because I was embarrassed, but because in that moment I was judged based on my looks, and I wasn’t going to share my story as
a justification.

For reasons such as this, there have been times where I’ve felt ostracized and it was hard for me to connect with others my age in the Jewish community. This is the primary reason why I wanted to go on Birthright Israel.

I went on Birthright this past June not knowing a single person, with the mindset that I wasn’t going to tell anyone that I had converted. I was afraid of being judged and feeling like a pariah for 12 straight days. Throughout the trip others shared their backgrounds, some had two Jewish parents, some were children of interfaith marriages, and some had mothers that converted. No one was regarded as being more or less Jewish than before. I realized that not everyone judges or tries to typecast you because of the way you look, what your name may be, or your background.

While in Safed, the boys and girls were separated. The guys went to their mikvah (ritual bath) and we went to ours, although we couldn’t go into it. We were a part of a discussion of the different things a mikvah represents and the reasons why a female would go to one. Our discussion leader asked if any of us aside from her had been to a mikvah. I was the only one to raise their hand. I received inquisitive looks from my group. I was asked why, and revealed I converted. So I shared my story…

I was raised Catholic. I was an altar girl and in the church choir, not necessarily because I believed in what I was doing, but because I was going through the motions of what I thought was expected of me. At age 16, I chose not to be confirmed. The beliefs and practices of the church were not the same beliefs and practices I shared. I could have easily dissociated myself from Catholicism and just celebrated holidays, but I didn’t want to take part in something I didn’t believe in.

I gave up on religion altogether and started reading philosophy, mostly existentialism.  For a few years it gave me the answers I sought. It wasn’t until I was studying abroad in Paris when I realized religion was missing in my life. I started doing research on different religions and Judaism had my name all over it. When I returned to the states, I met with the rabbi that would do my conversion. I approached my parents and told them I was converting to Judaism, which surprised them. It started a great dialogue and they were so supportive, and are still to this day.

After a yearlong process the day of my conversion came. My family and friends went to the Orthodox synagogue where the mikvah was located to support me. I don’t even think twice today because it feels natural. I’ve found a balance between my past and present.

After I told my story, the group asked me questions but, other than that, nothing had changed, which was reassuring. For our last Shabbat, an Orthodox rabbi and his family stayed at our Jerusalem hotel with us. That is probably the part that will stick with me the most. His wife was a Jew by choice. I was in awe because I reflected on the judgments and subtle jabs I encountered. She explained that we weren’t any less Jewish because we chose this. They left me with some Talmudic words of wisdom, which is everything I needed to hear: converting isn’t about changing religions, but rather showing you were always Jewish. These words made me finally feel like I belong.